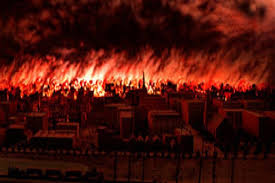 Throughout history there have been many fires, some apparently intentional, others by earthquakes, by accident or carelessness. Today we talk about the five most devastating fires in history. Who knows what would have happened if Grupo de Incendios had been present!

1. The Great Fire of Rome

One night in June of 64 d. C. declared an atrocious fire in the area of the Circus Maximus in Rome. The wind quickly spread the flames, spreading terror among the population. For six days and seven nights the fire spread in four of the fourteen districts of Rome which were devastated, and seven others were damaged. Finally, it was possible to enable the Esquiline Hill near an open area to serve as a firewall. Suspicion fell on Nero, and he said that the culprits were the Christians. This disaster is still, today, one of the most famous episodes of Imperial Rome.

1871 Chicago was a city built mainly on wood with buildings up to 6 heights constructed entirely of this material, and even many streets paved with wooden blocks to facilitate movement in a rapidly growing metropolis.

The story goes that a cow in a barn dropped a kerosene lamp inside the establishment, that little spark soon was fueled by the wind. From the beginning, firefighters fought the fire in an unequal battle, because the wind contributed to fan the flames for two long days, where wooden constructions torch each other destruction passed.

The fire had destroyed 6.5 square kilometers of the city center caused almost 300 deaths and left homeless more than 100,000 people. More than 17,000 buildings were destroyed, surpassing the estimated $ 200 million loss.

3. The fire of Santander

The February 14, 1941 a fireplace badly extinguished originated the fire, who was stoked by a wind storm from the south, over 180 kilometers per hour gusts, devastated during two days the medieval area of the capital of Cantabria, including its cathedral , which it would not be rebuilt until 1953. Thousands of families were left homeless and the city was in chaos and isolated from the rest of the country for days.

The fire caused a single victim, a Madrid firefighter. He died in hospital of Valdecilla after a slight recovery. Nevertheless, the material damage was immense and thousands of families lost their homes.

The LZ 129 Hindenburg was a German dirigible destroyed by a fire while landing in New Jersey on May 6, 1937, killing a total of 35 people (about a third of the passengers). The accident was widely covered by the media at the time and marked the end of airships as transportation.

The German dirigible has gone off the moorings and approached the tower, aft observed a flash of St. Elmo´s fire, which are extensive and unarmed static electric sparks. Suddenly he caught fire on top of the stern, stretching almost instantaneously around the airship while the structure fell slowly on passengers jumped from a height of 15 meters and sailors who helped in the maneuvers. It was completely destroyed in less than 40 seconds and his skeleton remained long in the ground until it was sold for scrap.

Despite the shocking disaster, of the 97 people on board he had only 35 died, most of them burned or crushed under the structure.

5. The Great Fire of London

The words of Nostradamus «The blood of the righteous will be claimed from London, burned to the ground, when three times twenty plus six is written,» they seemed to prophesy the great fire of London. They joined the coincidence of a year marked by the symbol of the devil (666); multiple demonic visions of the event did not wait.

In the mid-seventeenth century, London is an emerging metropolis that was fighting with the Netherlands for the control of international trade. But the September 2, 1666, the heart of the English stood before the tragic events that had just started.

The fire started in the house of the baker of Charles II, King of England. After being informed, the mayor disregarded the incident and stated that «a woman could extinguish the flames with a piss.» It was a mistake. As a result, in just five days the fire ravaged London. The fire main system of the city consisted of a series of firewalls that were made by demolishing the houses nearby. However, the owners refused to destroy their homes, triggering a rapid expansion of the flames.

More than 13,000 houses, 87 churches and three entrances to the city had been destroyed and 80,000 people were left homeless. The death toll is unknown, because many were not registered in the register of deaths.