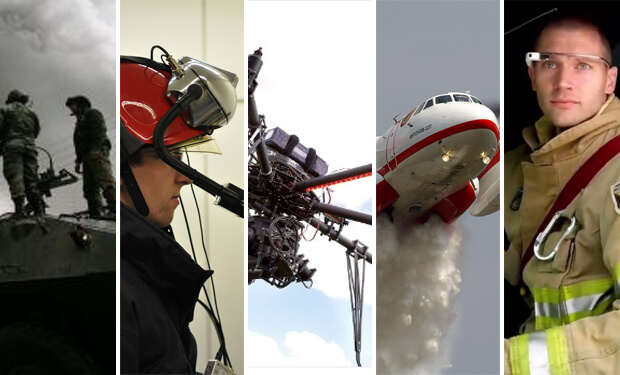 Today, firefighting requires research and investment in systems that help extinguish fires quickly and safely. In addition to space surveillance systems at NASA or the use of helicopters and planes to spray water from above, several companies today are focused on improving conditions for firefighters and the success rate in the rescue of victims. Laser holograms, drones and bionic masks are part of the systems currently available and in development, to improve the conditions of the firefighters in dangerous situations.

In 2012 the company Tanagram Partners presented the new generation of helmets for firefighters: a system that uses augmented reality to show the user the temperature, air consumption, time remaining oxygen, vital signs, battery radio, escape routes and the location of the other team members in a structure that will have an initial cost of $ 5,000 unit (about 2.7 million pesos) but is still awaiting necessary permits and evidence.

Last February, the Consiglio Nazionale delle Ricerche (CNR) of the National Institute of Optics in Italy introduced a system of infrared lasers and holograms with the ability to penetrate smoothly fire and smoke, reflecting objects and people to create 3D models a burning room. According to experts, it is expected to improve the device with a measuring cardiac activity and respiration of the victim and might be released later this year.

50 years ago, a wildfire could be photographed and blurry images were sent firefighters on the ground inside a tube. Today, the technology used in the drones can also help in these situations. In the National Oceanic and Atmospheric Administration (NOAA) of the United States they are already using 60 of them to display areas inaccessible to firefighters.

Two months ago, Google published the story of Patrick Jackson, a firefighter and software developer North Carolina enrolled in a program the company seeking ideas for their augmented reality glasses Google Glass. This resulted in two applications: One sends emergency calls to the device, showing the address where you should go, the fire situation and indications of the proximity of a tap; and the other shows a schematic drawing of a burning building, facilitating the work firefighters even before their arrival. The system is already in the corresponding tests and simulations.

The Antonov An-32P, a multipurpose tactical transport aircraft belonging to the army of Ukraine, originally built in 1976. It has excellent performance in tropical environments, hot weather, high altitude, can be modified depending on the needs of use (there 10 versions), it reaches 540 km / h and is capable of supporting up to 27 tons of weight. The model includes two external Firekiller with which it is able to drop 8 tons of water to a height of 40 meters above the ground and at a speed of 240 km / h tanks. In the world there are a total of 240 operational aircraft and its cost reached in 2000 between 6 and 9 million.